On May 16, 2013, the Southern California IFDA chapter held its Take A Seat auction at Planet Rooth Design Haus in San Diego, California. 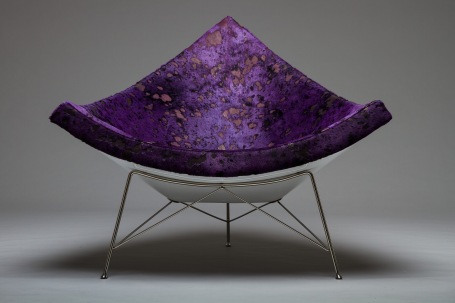 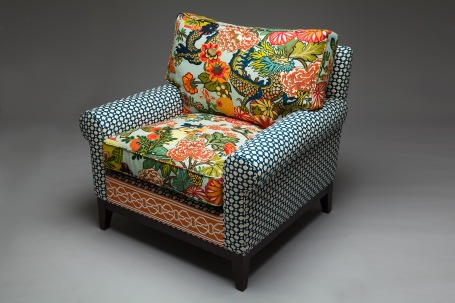 Showrooms at the Laguna Design Center teamed up to provide Schumacher fabrics on a Swaim chair upholstered by Lisa Davis Upholstery for Mary Mai’s Betwixt Mix at the 2013 exhibition in San Diego. 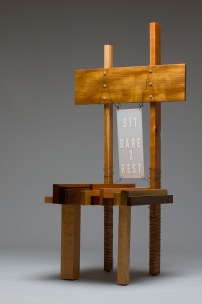 Eva Clemens, owner of Studio Europa, created Sit-Dare to Rest from scrap wood she had been collecting for ten years. It has an uneven seat and one leg is slightly shorter as a dare to “Take a Seat” even if it is uncomfortable. 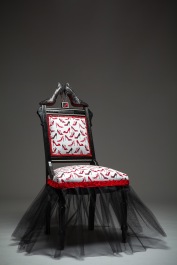 Karen Wirrig of Karen Cole Designs used her obsession with chairs and shoes to create a whimsical piece with attitude called So Shoe Me! for the 2013 San Diego exhibition. 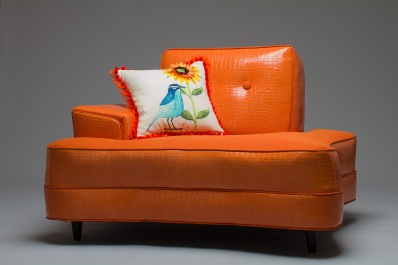 Karen Taggart owner of Shades of Light San Diego, used the color psychology of orange to create a seat that radiated energy and optimism for the 2013 exhibition. 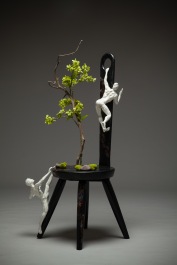 Julia Rasor sculptor, took a little antique chair that had been in her family for over 50 years and created Get Off Your Seat. 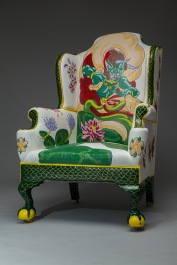 Keith Greene of GreeneArtProductions was inspired by the legends of the Japanese gods of Wind and earthquakes to paint this statement piece for the 2013 exhibition in San Diego. 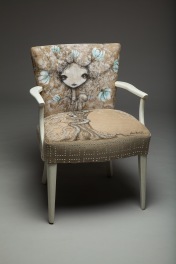 Four members of Design Forward Collective, a local peer group, took a shabby old chair and gave it new life with luxe fabrics and trims, and hand painting on all the upholstery as well as the arms and legs for the San Diego exhibition. 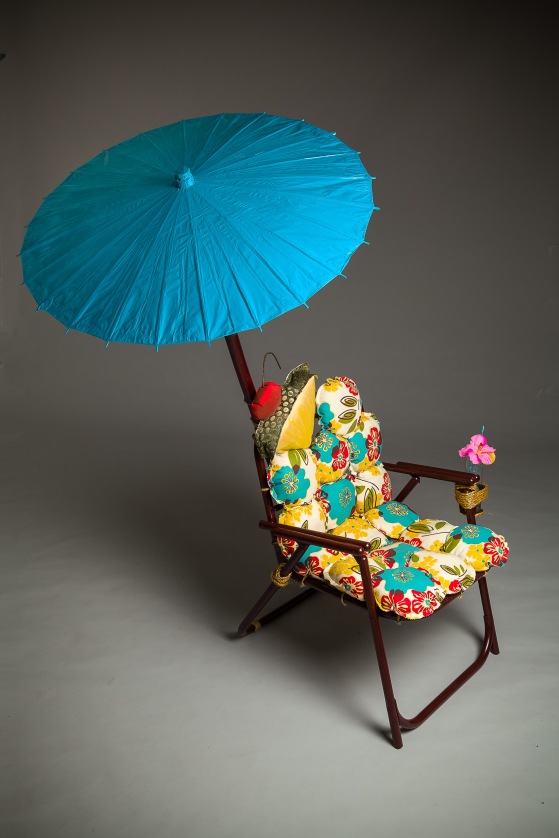 Amber Style of Amber Style Environments created MaiTai’m Out after finding a rusty old beach chair at a flea market. Now it provides an inviting and festive respite when you need a change of state. 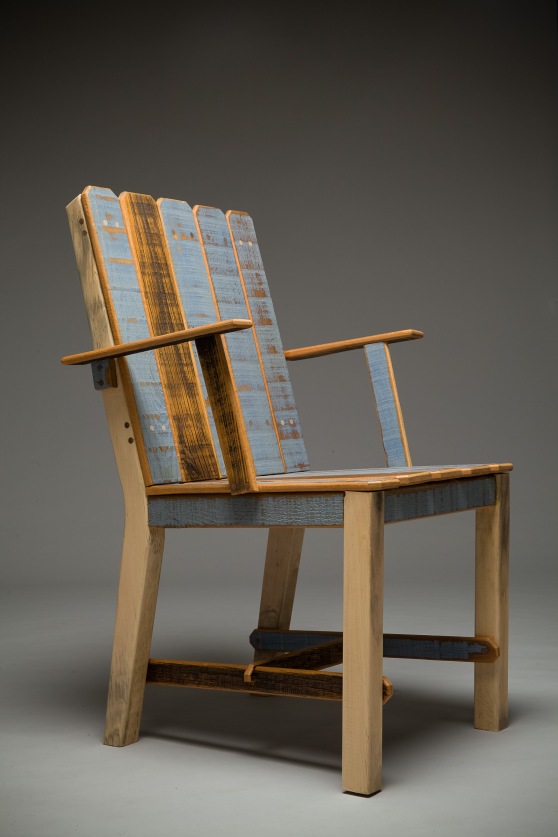 Daniel Gooding, industrial designer, used reclaimed fence material (pine) and basswood as well as old oak arms rests he found in a scrap bin to create On the Fence for the San Diego exhibition. 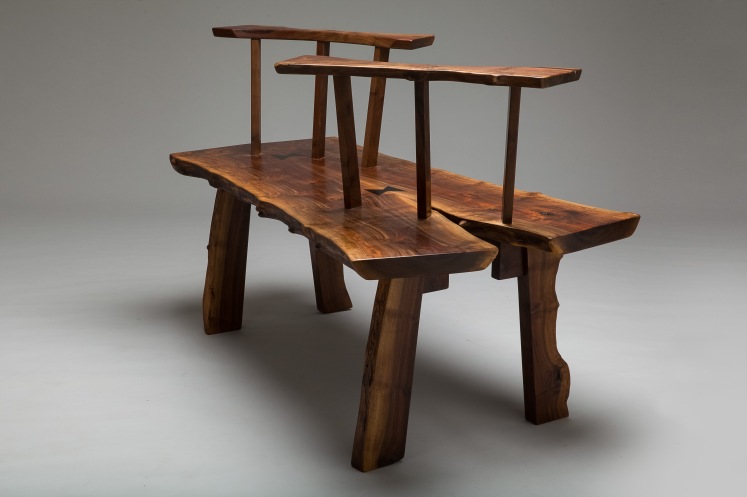 Dennis Schlentz, master furniture maker and owner of Dovetail Furnishings, was inspired by Geoerge Nakashima when he used salvaged walnut hardwood to create the tete a tete bench.. 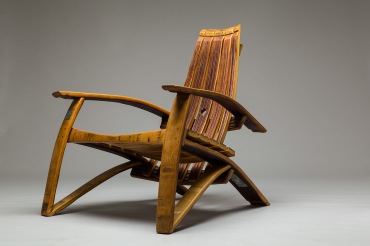 Gustav Anders Rooth Jr., owner of Barrelly Made It and master craftsman, takes recycling to new heights by using wine and whiskey barrels and repurposes the parts into fine furniture. 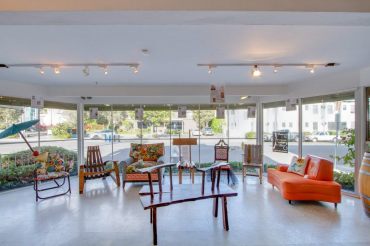 Some of the imaginative chairs exhibited at the 2013 Take a Seat in San Diego. 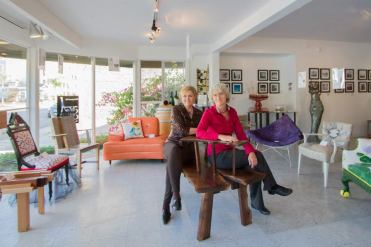 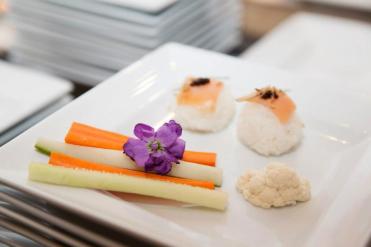 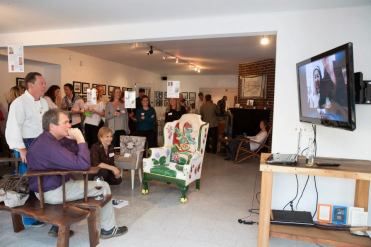 One highlight of the kick off party in 2013 was the live Skype broadcast with Japan and NYC. 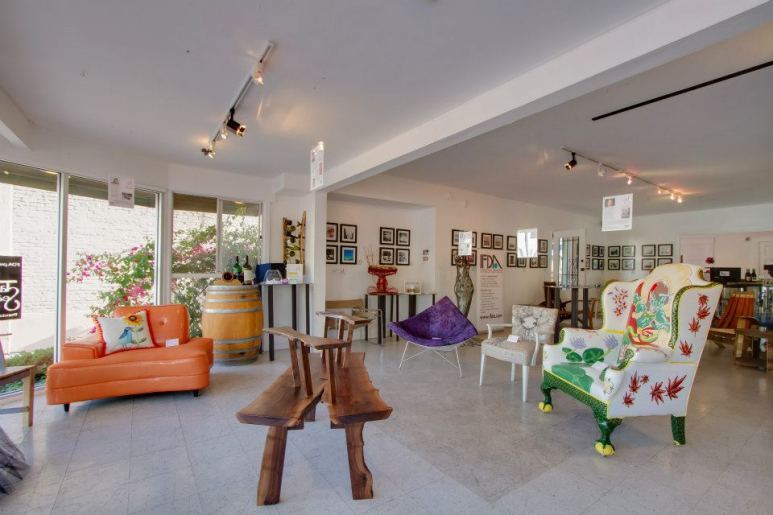 Planet Rooth Design Haus provided a perfect venue for the 2013 Take a Seat exhibition in San Diego and added an art show for even more excitement during the event. 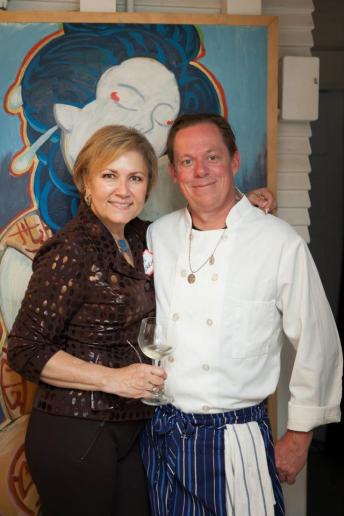 Special thanks to Gustaf Rooth who not only created a chair for the 2013 exhibition but furnished the venue space and helped with the cooking for both the kick off and gala auction party in San Diego. 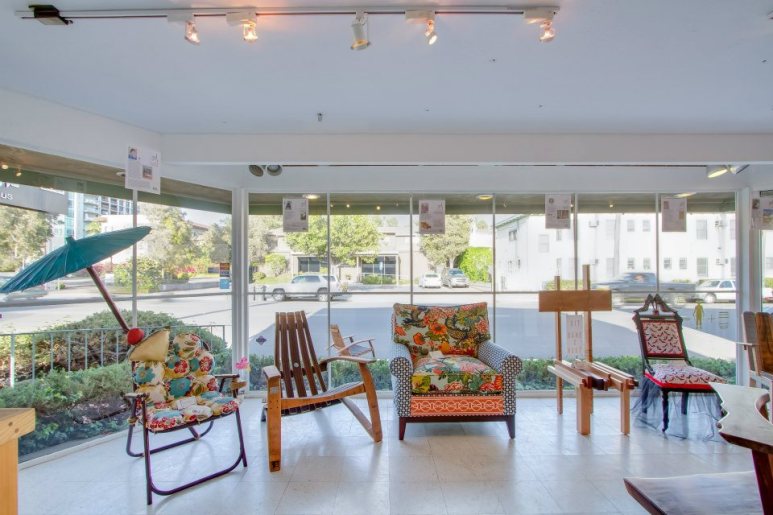 Some of the exciting chairs featured in the 2013 Take a Seat exhibition in San Diego. It was great to have such window display right on the street thanks to Planet Rooth Design Haus. Special signage was created for each chair which appears to float above each chair. It describes the chair designer, their company, and a picture of the “before” chair. 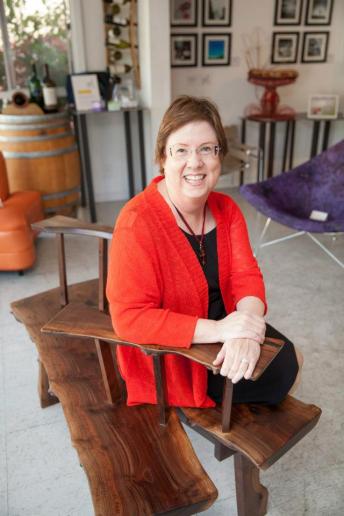 The IFDA SoCal chapter was pleased to welcome Kate Leonard, honorary consul general to Japan for San Diego, to both the kick off event and the gala auction where she was the successful bidder on several chairs. 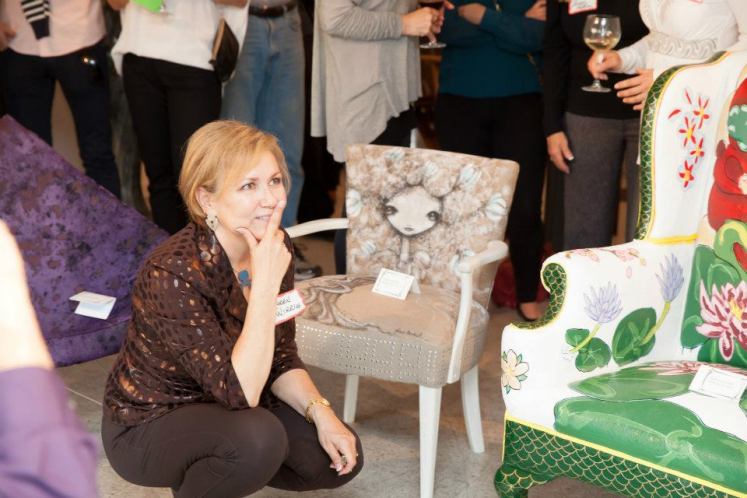 Karen Wirrig, 2013 Take a Seat coordinator, watches the computer screen during the live simultaneous Skype broadcast with Japan and New York City. Coordinating the international time zones for the kick-off party was only one of the challenges! 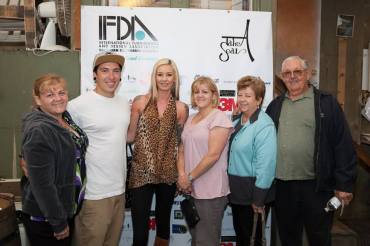 Daniel Gooding, second from left, is surrounded by his proud family not only because of the wonderful chair he created for the 2013 exhibition in San Diego but also because he had just graduated from San Diego State University! 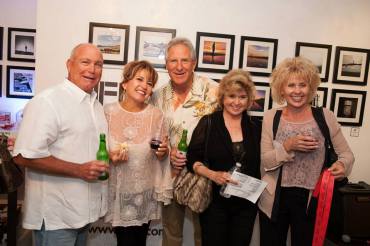 Rick and Cherie Nelson, Ed and Dodie Shoen, and Shelley Miller are having a great time at the 2013 San Diego Take a Seat gala auction at Planet Rooth Design Haus. 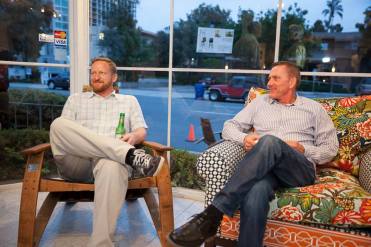 Two 2013 San Diego gala guests enjoy the chairs before they are auctioned out from under them. 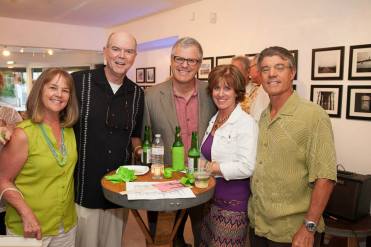 Some of the many guests to attend the 2013 Take a Seat gala auction in San Diego. L-R Reene Faulstich, Steve Wirrig, Brad Shoen, Nora Shoen, and Larry Waters. Brad and Nora Shoen were the high bidders of the evening and acquired the meticulously crafted bench entered by Dennis Schlentz. 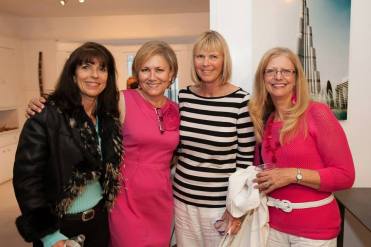 Four Karens all in a row enjoyed the auction gala for 2013 Take a Seat in San Diego.